33 Turner Street
Back to MapContribute

Turner Street
Contributed by Survey of London on Feb. 17, 2020

Turner Street was named in honour of Charles Hampden Turner, the chairman of the House Committee of the London Hospital during its financial struggles in 1807. This north–south thoroughfare running from Whitechapel Road to Commercial Road was laid out soon thereafter following an agreement with the City Lands Committee to preserve air circulation around the hospital, with the additional boon of improving the accessibility and value of this part of its estate. The west side of Turner Street was built up between 1808 and 1816, when leases were granted for completed buildings. A few remaining lots were taken on building leases in 1822–3. Development advanced more slowly on the east side of the street, with the first dwellings completed by 1811 at the south end. Larger takes between Varden Street and Newark Street were granted between 1819 and 1824. A notable resident of Turner Street was the radical social reformer Charles Bradlaugh, who rented modest rooms at No. 29 between 1870 and 1877. Bradlaugh was commemorated in 1961 by an LCC plaque, with the inscription ‘advocate of free thought’, since lost after the row was cleared for the housing block at Nos 19–25.1

33–43 Turner Street. A row of six houses on the west side of Turner Street survives from the first phase of development on the east side of the hospital’s estate. These two-storey dwellings with raised basements were constructed between 1809 and 1814. In 1811 Moses Crawcour, a local dentist, was granted a lease of Nos 37–43 and John Curtis leased No. 45. James Wand and Gilbert Madden took Nos 33 and 35 in 1814. The houses fell into decline and by 2005 their site had been acquired by the London Development Agency and earmarked for a bioenterprises innovation centre for Queen Mary University of London. Also at risk were 19–25 Varden Street around the corner. The Spitalfields Trust, led by Tim Whittaker, intervened to precipitate a scheme to shift the university centre to a site fronting New Road. Paul Latham of the Regeneration Practice drew up plans to restore the vacant houses in Turner Street and Varden Street in collaboration with Whittaker. Assistance was also enlisted from the new owners of the houses, including Robin Forster, a former civil engineer, and Pedro da Costa Felgueiras, a historic paint and lacquer expert. Attics were constructed behind gambrel roofs and covered with handmade pantiles, and rear timber-clad extensions were added, taking inspiration from evidence of the past existence of such vernacular forms elsewhere in east London. Timber shutters and interior panelling were also introduced. Rear gardens were reinstated after the removal of a car park. The works, completed in 2010, received a ‘Restoration of the Century’ award from _Country Life _magazine.

The red-brick corner building at No. 45 was raised by a glass-faced steel- framed storey in 2009–10 to designs overseen by Threefold Architects. On the east side of Turner Street, No. 64 was handed to William Thomas on a building lease in 1823. The house is currently used as an office for the life sciences department at Queen Mary University of London.2 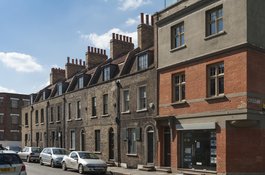 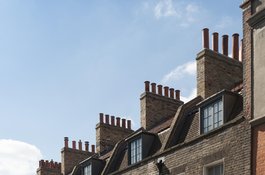