School of Nursing and Midwifery
Back to Map

Princess Alexandra House was built in 1965–7 as the Princess Alexandra School of Nursing, to designs by T. P. Bennett & Son, with Faber & Partners, consulting engineers. A playful foil to the height and angular footprint of John Harrison House, it comprises a five-storey rectangular block with a circular lecture theatre encased in a squat brick-built drum, externally faced with concrete. The stark concrete exterior of the projecting lecture theatre contrasts with the administrative appearance of the cuboid block, which has horizontal bands of fenestration separated by dark blue tiles. Each of the principal floors contained teaching spaces and offices arranged around a central corridor. The fourth floor was laid out for a large library with common rooms for students and tutors. The building continues in use by St Bartholomew School of Nursing and Midwifery, part of the School of Health Sciences at City University since 1995.1

Recollections of a student nurse at the Princess Alexandra School of Nursing in 1967
Contributed by Amy Spencer, Survey of London on Nov. 24, 2017

The new School of Nursing was most exciting, with its carpeted corridors, large practical rooms set out like wards in the hospital, a well equipped library very comfortable to work in, a lecture theatre, discussion rooms, in fact everything a model school of nursing should have... There were several teething troubles in the early part of our course, with lifts that would insist on going their own way, and smart venetian blinds that became temperamental when handled! ... We were really thrilled with our lovely modern school...1 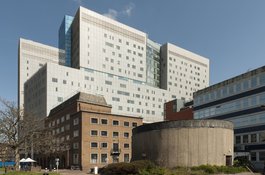