25 Osborn Street
Back to MapContribute

This frontage was cleared and in 1949 put to use as Osborn Garages, motor-car repairs, with petrol tanks and pumps in a forecourt and a single-storey flat- roofed workshop behind, erected in 1950 on the site of the Amor foundry. The south wall of the former Warner foundry to the north was also rebuilt. Retaining its hipped timber-trussed roof, that early range, possibly dating back to the last years of the Swan brewhouse, was thereafter used by the Commercial Processing and Stove Enamelling Co. Ltd and Bradley & Gale Co. Ltd, silk-screen printers. A further garage building was added in 1969 on the northern section of the street frontage. The walls of a once three-storey building in the south-west corner of the site, used as storage in the 1890s for the Warner foundry, with a single-storey building inserted in the 1950s as part of the enamelling works, survive in a derelict condition.1

In 1973 Ronald Trebilcock, architect, prepared a scheme for redevelopment of the site at Nos 15–25 with a three-storey office and warehouse range, but this did not proceed.2 A generation later, in 2000, SDI Display Ltd, owners of the site and occupants of the former Warner foundry, proposed complete redevelopment of the Swan Yard site, taking in Nos 15–25 and the former Coope beer-barrel store, which was the only building to be retained. The scheme, designed by Clive Hough, architect, intended a brick-faced five-storey L-shaped block of fifty-eight flats, with twenty-five per cent ‘affordable’ accommodation to be acquired by Providence Row, the occupants of neighbouring buildings to the west (see p.xx). But this too was dropped. In 2001 the site was sold to the Zeloof Partnership, developers of the Old Truman Brewery in Brick Lane; ownership transferred in 2012 to Truman Estates Ltd, based in Jersey. A new application in 2003 excluded Nos 15 and 17 and proposed refurbishment of the existing buildings as an entertainment venue, with a function room in the foundry and bars below studios and offices in the beer- barrel store. This was withdrawn and the site was squatted for several years, every accessible surface adorned with street art. In 2012 lawyers acting for the City Hotel across Osborn Street complained to Zeloof that ‘“Your land is being used as a centre for crack cocaine drug dealing and use; a hive of anti- social behaviour ranging from intimidation and petty crime to begging and arson” and that it was “entirely common” to see rats, fires and “people walking around completely naked and defecating” in the yard … “One night an individual jumped over the hoarding of your land, walked up to the {hotel's} bar manager and asked whether he wanted to buy cocaine.”’3 Security was improved with metal fencing and in late 2018 the barrel store underwent consolidation works.4

Swan Yard
Contributed by Survey of London on Oct. 4, 2019

The earliest known occupation of the site that is now 15–25 Osborn Street was as a brewery attached to a High Street inn, the Swan with Two Necks, later the White Swan. There was a Swan alehouse in Whitechapel in the early fifteenth century, and the Swan brewhouse at this site is known from 1616, when it was enfranchised by James Enyon and Samuel Cranmer. Enyon (or Enion), whose origins were in Northamptonshire, had established himself as a brewer here some time previously. Cranmer (1575–1640) was another brewer and a City Alderman, also the great-great nephew of Archbishop Thomas Cranmer. In 1613 he married Margaret Alford, whose first husband, Philip, was Enyon’s nephew and business partner. Enyon had retired by 1617, and Cranmer was his executor when he died in 1623. Thus did Cranmer obtain effective control of the brewery. The land was an irregular rectangle, 240ft east to west, running from Dirty Lane to Angel Alley and about 150ft north to south. With the inn on the High Street and the brewhouse behind, it also took in two small houses ‘lately built’ to the rear and an acre and a half of garden ground north of that, which appears to coincide with the site of 17–25 Osborn Street extending back to Angel Alley.1

The brewery property, including the inn, was sold in 1656 to Richard Loton, who appears to have rebuilt on the High Street. A narrow alley, known later as Queen’s Place, ran through the White Swan (later 81 Whitechapel High Street) to the brewery yard. Loton oversaw redevelopment of the whole Swan Yard site, much of which was leased from the 1660s to Richard Darnelly, father and son, Nonconformists and a haberdasher and physician respectively. Among several houses on the east side of Angel Alley one, probably Loton’s own, was substantial. John Warren, a gardener, occupied a plot on Dirty Lane. Following Loton’s death in 1692 the whole property passed to his son Edward and grandson Samuel, both of whom were dead by 1698. Edward Loton sold the heavily mortgaged brewhouse and inn to John Pettitt, a citizen merchant tailor, in 1695. Pettitt leased the brewhouse with the High Street properties to Thomas Edwards, another brewer, for 31 years in 1701. Samuel Loton had bequeathed the rest of the holding, including the Darnelly portion, to his cousin Jeremy Mount in 1698, to discharge debts and pay legacies. By 1719 this property was occupied by Samuel Lane, a distiller and sugar refiner.2

From Thomas Edwards (d. 1717) the Swan brewery passed to his daughter Ann (d. 1761) and her husband, Francis Brownsword (d. 1737), ‘Master of the Swan Brewhouse … He was immensely rich and ‘tis reckon’d he died worth 100,000l’.3  The brewery was inherited by their daughter Sarah Bullock in 1761, whose sons Francis and Thomas ran it, Thomas expanding the enterprise considerably after Francis’s death in 1785, by when Dirty Lane had been widened to be Osborn Street. By 1794 the brewery was in the hands of another brother, Henry Bullock (d. 1805), who ran up large debts. A partnership with John and Alexander Anderson and William Watson in 1800 could not stem the decline. Bullock’s will of 1803 was not settled until 1817 by which time two of his partners had also died and the survivor, Alexander Anderson, was also bankrupt. The same fate befell the next brewer–lessee, John Cumming, in 1818.4

With small-scale brewing becoming ever less viable, the lease of the yard was offered for sale in 1819. The property, consisting of ‘a brewing office, malt and hop lofts, running stories, store cellars, stabling and forage lofts, a spacious yard in which is a counting house, and an arrangement of minor offices’, was described as ‘convertible at a very inconsiderable expence to the purposes of any business requiring room’.5 Brewing did continue on a reduced scale, but with apparently no more success, as new brewers regularly appeared and disappeared. At least two – Charles Young, in 1830, and William Filmer and William Smith Gooding, in 1842 – also fell bankrupt. By 1843 brewery plant had been sold off and one of the main buildings was in use as a shooting gallery, to the annoyance of neighbours.6

The freehold of Swan Yard (excluding part held by Richard Coope) and the former inn had been acquired by 1847 by Samuel Pedley, of a family of cordwainers long-established in Whitechapel. It remained with his family into the 1930s. The empty brewhouse was either reduced or demolished and rebuilt on a smaller scale. A huge fire on Coope’s property in 1852 damaged several Swan Yard buildings, including that on the brewhouse site which had come to be occupied by John Mills, a steam-engine boilermaker, with an adjoining house, later 15 Osborn Street, a six-room part-timber-fronted cottage. Those buildings were later used by the Sugar Refining Co. Ltd, and then by a carman. Much at this south end of the yard was demolished in 1897 for the building of the Whitechapel Gallery. Shortly before the First World War what was left of the yard was assessed as ‘very old, dilapidated, and the buildings per se are practically of no value’.7

Other buildings in the yard had been adapted to other uses before the demise of the brewery. A southerly warehouse, sold off in 1818 with 77–80 Whitechapel High Street, was used thereafter as storage for a greengrocer’s premises at No. 79. By 1831 there was a small foundry (Deeley and Clarke’s) in the middle of the yard. This and a house fronting Osborn Street at the corner of the Swan Yard entrance (later No. 17) were taken over in 1844 by Thomas Amor, a brass founder specialising in brass cocks for the brewing industry; he was also a Muggletonian.8 Amor rebuilt around 1854 to form a turnery and forge at the back of the site, with a double-fronted two-storey shophouse to the street. By the 1880s, Amor’s firm was providing fittings for machinery used by ‘brewers, distillers, soap boilers, hospitals and parish unions’.9 The business passed into the ownership of J. H. Swiney from around 1886 till Thomas Noakes & Sons, engineers, took over in 1911. They remained into the 1920s when the main building became a second-hand furniture warehouse. War-time destruction extended to the house at No. 17.10

In 1819 a large building on the north side of Swan Yard (later 21 Osborn Street) that survives in much-altered form became the iron foundry of Henry Welland, a whitesmith previously in Red Lion Street. It continued in like use under Ward and Ainger, Ainger and Handyside, Samuel and William Standing (employing sixty men in 1851), Joseph Bolton Doe and, finally from 1871, John Warner (1843–1923), a cousin of the Warners who were brass and bellfounders on Jewin Crescent and Spelman Street, and of Metford and Henry Warner in Kent and Essex Yard. The foundry and smaller buildings west and south were partly rebuilt in the 1930s and remained part of John Warner Ltd until about 1941 when much of Swan Yard was badly damaged in the Blitz.11 No. 19, adjoining the entrance to Warner’s foundry on one side and Amor’s premises on the other, had been rebuilt in 1873 as a three-storey rag warehouse, occupied in the 1890s by Wettmann & Co. who diversified into confectionery manufacturing.12

The Osborn Street frontage of Swan Yard, which included ancillary brewery buildings and houses until 1819, was thereafter a mix of small houses and shophouses mostly associated with the businesses behind.13 This began to change in 1861 when a large four-storey building with a 35ft frontage and large windows went up in front of the iron foundry, on the site of 23 Osborn Street, as a warehouse and tailoring workshop for the outfitters Hyam & Co. Ltd, then rebuilding their Oxford Street premises in high style.14 Hyams left the building by 1905 after which it had varied uses, including from the late 1920s as offices for the Grand Order of Sons of Jacob (Grand Order) Friendly Society, offering financial help to distressed Jews. This building also succumbed to the Blitz.15 The adjoining site at No. 25, historically part of the brewhouse holding, became part of Stepney Borough’s electricity substation in 1928. 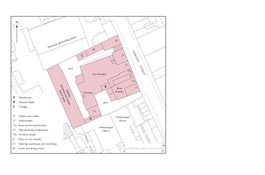