Synagogue built to designs by Lewis Solomon and Son, 1922–3

The East London Central Synagogue or Nelson Street Sfardish Synagogue of 1922–3 is a remarkable survival and a late example of a ‘model synagogue’, designed by Digby Lewis Solomon for the Federation of Synagogues. The congregation began as an immigrant Hevrah, a Landsmanschaft from Berdichev in Poland, and has maintained great continuity of use. An unassuming red-brick exterior with large round-headed windows hides a dignified neo-classical interior with Ionic columns and clerestory lights cut into a coved ceiling above a deep moulded cornice, all deriving from James Spiller’s Great Synagogue of 1788–90. The Ark is set in an apse in a simple Palladian composition.1 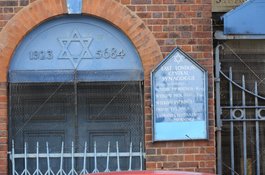 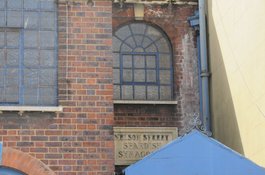 View of plaque on the north elevation of the East London Central Synagogue
Contributed by Amy Spencer, Survey of London