19 Varden Street
Back to Map

Varden Street
Contributed by Survey of London on Feb. 17, 2020

Varden Street was known as Norfolk Street till 1874. Vacant lots were advertised to builders in 1807, but only the stretch between New Road and Turner Street had been built up by 1819, with thirteen dwellings on the north side and twelve on the south side. Only four of these houses survive, at 19–25 Varden Street, recently refurbished with 33–43 Turner Street. John Bromley took a lease for Nos 19–21 in 1809, with two houses adjoining to the west (demolished). Leases for Nos 23–25 were granted in 1813 to William Phillips and John Danson on the completion of building work. Bromley also took 3–9 Varden Street in 1809. Development to the east of Turner Street was deferred. John Clarke, the builder, acquired building leases for nine dwellings on the south side in 1826 and 1829, and took others for a further nine dwellings (Nos 27–43) on the north side in 1826. Other houses were beyond the hospital’s estate on land belonging to Hawkins.1 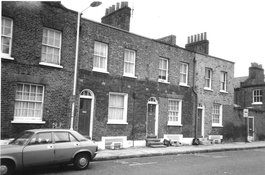 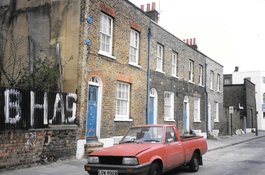