Greater Whitechapel
Back to MapContribute

The Chronos Building
Contributed by david3 on July 18, 2019

The project responds to the varied urban context of Mile End Road and is arranged in three blocks, one repairing the Mile End street frontage and the other two enclosing
quiet mews court to the rear.

A five storey rotunda provides a geometric transition between new and old, and marks the new pedestrian entrance to the courtyard behind.

The site, a former vehicle depot, is located in the historic Whitechapel conservation area and is adjacent to the seventeenth century Trinity Green Almshouses on the major eastern approach to the City of London.

The design developed with the active support of the Royal Fine Art Commission and the Ancient Monuments Society. 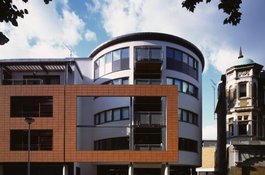 The Chronos Building
Contributed by david3